Care is not a word generally associated with political crises. However, following the mosques massacre in New Zealand, Prime Minister Jacinda Ardern was found to have used care and a feminist approach to political communication that served to unite rather than divide her country following this racially motivated terrorist attack. There is much literature on corporate crises, but this paper adds to the dearth of literature on political crises in a public interest context. Grounded in a consideration of care and agenda building theories, it reveals that a caring approach to political communication (both verbal and nonverbal) following an act of terrorism can influence the media agenda and by extension public opinion.

Dr Pamala Proverbs is the managing director of the public relations agency, PRMR Inc. located in Bridgetown Barbados. Her research interests include public relations’ use in the social and political sphere especially in developing regions and in the context of gender and other social disparities. She won the Arthur W. Page Center Top Ethics Paper Award and the Betsy Plank Graduate Research Competition Award for the top student paper at the PRSA Educators Academy Super Saturday Conference in 2019 and was a finalist in the PRNEWS 2021 CSR and Diversity Awards.

Dr. Xiaomeng Lan is an assistant professor of public relations in the Division of Humanities & Social Sciences at Beijing Normal University-Hong Kong Baptist University United International College. Her research focuses on two main areas. The first concerns the role and effects of public relations in the public sphere, where diverse publics—citizens, governments, journalists, corporations, and other groups—make use of (social) media venues to communicate their opinions and interpretations of issues of social and political importance. The other focus of her research has been on technology-mediated public engagement. She formerly worked as a journalist/editor of international news and comments at China Times, a Beijing-based financial and economic newspaper.

Osama Albishri is a Ph.D. student in International Communication at University of Florida. He is a faculty member at King Abdulaziz University in Saudi Arabia. His primary research interests include political communication, public diplomacy, social network analysis, and computational content analysis. He has focused his research on issues that are mostly related to the Middle East.

Dr. Spiro Kiousis is interim dean and executive associate dean for the College of Journalism and Communications and is a professor of public relations. Previously, he served as chair of the Department of Public Relations from 2006-2012, was director of distance education for the College from 2010-2013, and was a University of Florida Research Foundation Professor from 2009-2011. From 2013-2014, he was selected as a SEC Academic Leadership Development Program fellow from Southeastern Conference universities. He holds a B.A. in mass media from the University of San Francisco, an M.A. in media studies from Stanford University, and a Ph.D. in journalism from the University of Texas at Austin. His current research interests include political public relations, political communication, and digital communication. Specifically, this interdisciplinary research explores the interplay among political public relations efforts, news media content, and public opinion in traditional and interactive mass mediated contexts. 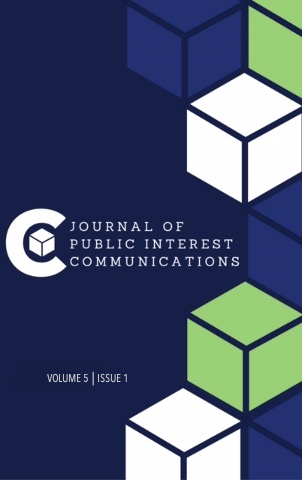 By submitting to the Journal of Public Interest Communications, the author(s) agree to the terms of the Author Agreement. All authors retain copyrights associated with their article contributions and agree to make such contributions available under a Creative Commons Attribution License (CC-BY NC) 4.0 upon publication.

This agreement takes effect upon acceptance of the Submission for publication in JPIC.

JPIC follows an open-access publishing model, meaning that all articles will be publicly accessible on the Internet immediately upon publication. I understand that I may share the submitted manuscript (preprint) of the Submission on the Internet at any point before or after publication, with a citation and link to the final version of record to be added as soon as the issue is available. I may disseminate the final peer-reviewed version at any point after publication.

JPIC applies a Creative Commons Attribution License (CC-BY NC) 4.0 to encourage sharing and reuse of content and to maximize the impact of published research. By publishing in JPIC, I agree that the terms of this license will be applied to the Submission. Smathers Libraries (copyright@uflib.ufl.edu) may be able to offer additional information.

By granting this license, I acknowledge that I have read and agreed to the terms of this agreement.