A field experiment was carried at Culatra Beach in Algarve (Southern Portugal) to determine longshore transport rates and sand mixing depth on a steep (slope 0.11) meso-tidal beach. The experiment was undertaken over one and a half tidal cycles using sand tracers in conjunction with wave and current monitoring. Variation of mean significant wave height during the experiment was limited (0.34-0.37 m) with mean zero-up crossing periods of 5.1-5.8 sec. Mean longshore current velocities in the breaker zone reached a peak in the second tide (0.28 m sec-1), while they were one order of magnitude smaller during the first (0.02 m sec-1) and third tide (0.04 m sec-1). The increase in current speed was due to a moderate wind that was blowing along shore during the second tide. Average advection velocity of the tracer cloud and longshore currents showed a good correlation, leading to calculation of much larger transport rates for the second tide (1.38 X 10-2 m3 sec-1 ) than for the other two (0.23 X 10-2 m3 sec-1). Average depth of sand mixing of 10.6 cm in the beach face was 29% of breaking wave height and showed a marked uni-modal distribution, with maximum of 15 cm in the breaker zone. Previously published empirical formulae do not predict satisfactorily this behavior in depth of sand mixing that seems to be peculiar of steep beaches under plunging waves. Empirical formulae were used to compute theoretical longshore transport and compare it with field observations. They all underestimated measured transport rates of about one order of magnitude, thus confirming that the morphodynamics of steep beaches are characterized by relatively high sediment transport even in relatively low energy regimes. 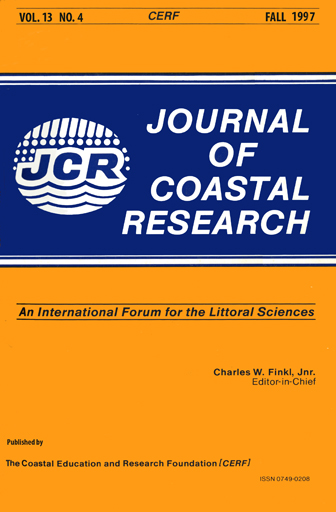 Published
1997-10-05
Issue
Vol 13 No 4 (1997): Journal of Coastal Research
Section
Articles
Authorization for personal use is granted by the Coastal Education and Research Foundation [CERF]. By submitting a manuscript, the authors agree that the copyright for their article is transferred to the publisher if the article is accepted for publication. Assignment of copyright is not required, however, from authors who work for organizations which do not permit such assignment, The copyright covers the exclusive rights to reprduce and distribute the article, inclduing reprints, photographic reproductions, microform, or any other reproductions of a similar nature, and translations.