On a clear calm evening during July 1992, an anomalously large wave, reportedly 6 m high, struck the Daytona Beach, Florida area. We hypothesize that a squall line and associated pressure jump, traveling at the speed of a free gravity wave, coupled resonantly with the sea surface forming the large wave or "squall-line surge." The wave was forced along the length of the squall line, with the greatest amplitude occurring at the water depth satisfying the resonant condition. Radar observations showed a strong squall line moving at a steady speed for several hundred kilometers parallel, to the coast from Georgia towards central Florida. The squall line dissipated 10 km north of Daytona Beach; any forced wave would then propagate freely and refract. Wave refraction analyses predict a longshore distribution of wave heights consistent with field measurements of maximum wave runup. 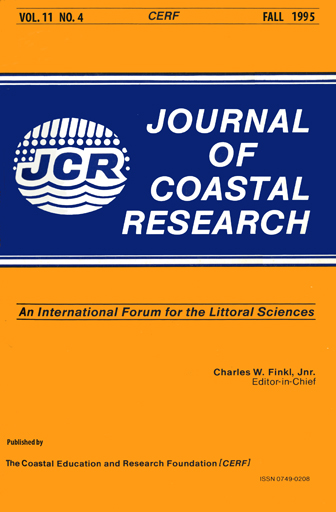 Published
1995-10-17
Issue
Vol 11 No 4 (1995): Journal of Coastal Research
Section
Technical Communications
Authorization for personal use is granted by the Coastal Education and Research Foundation [CERF]. By submitting a manuscript, the authors agree that the copyright for their article is transferred to the publisher if the article is accepted for publication. Assignment of copyright is not required, however, from authors who work for organizations which do not permit such assignment, The copyright covers the exclusive rights to reprduce and distribute the article, inclduing reprints, photographic reproductions, microform, or any other reproductions of a similar nature, and translations.