The Syrian Coast: A Model of Holocene Coastal Evolution

On the calcareous Syrian coast, rocky but low for the most part, three different processes alternated several times during the Holocene: heavy sedimentation with prograding beaches; mechanical erosion with the receding of the coast and the formation of beach-rock; organogenic construction (vermetids) and biocorrosion. No less than three main aggradational phases occurred (during the 4th millenium BC, the 2nd millenium BC and the medieval period); each of them can be correlated with an important alluvial discharge from the Lebanese and Syrian wadis and rivers, carried by the South-North coastal drift and built into huge beaches. Only the last fluvial terrace (the medieval one) could be C-14 dated so far, but the oldest terrace, rich in Neolithic sherds, cannot be older than the 5th millenium BC, and the second one contains Bronze Age (2nd millenium BC) artifacts. So the aggradation beaches are clearly in phase with fluviatile discharges controlled by climatic oscillations or anthropic factors. When the alluvial discharge diminished, former beach deposits were eroded by the waves and currents, the coast receded and beach-rock formed. The unconsolidated beach sediments were, to a large extent, carried away, and biological and biochemical processes developed on the bedrock and beach-rock (vermetids settled down and corrosion benches developed). Then whenever a new alluvial phase occurred, the vermetids were eroded or disappeared; fossilized under beaches, the biological and biochemical processes stopped, and a new cycle began with an aggradation beach stage. So during the Holocene on the Syrian coast, several geomorphic processes successively occurred, mainly controlled by climatic oscillations but also probably by anthropic factors. According to numerous C-14 datings, the duration of each phase was about a millennium. 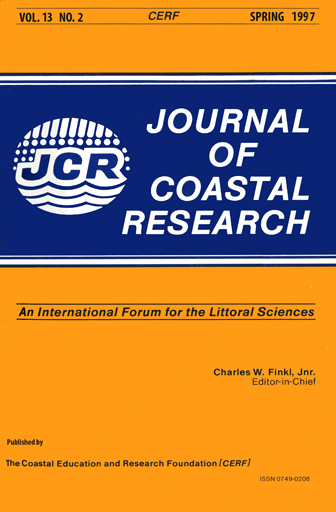 Published
1997-04-05
Issue
Vol 13 No 2 (1997): Journal of Coastal Research
Section
Articles
Authorization for personal use is granted by the Coastal Education and Research Foundation [CERF]. By submitting a manuscript, the authors agree that the copyright for their article is transferred to the publisher if the article is accepted for publication. Assignment of copyright is not required, however, from authors who work for organizations which do not permit such assignment, The copyright covers the exclusive rights to reprduce and distribute the article, inclduing reprints, photographic reproductions, microform, or any other reproductions of a similar nature, and translations.