A wave refraction model has been used to evaluate sediment dispersal patterns along the Bangladesh coast, particularly at the mouth of the Ganges-Brahmaputra river system. While the results are qualitative in nature, they offer new insight into the deposition of sediments in this tide dominated setting. Hindcasted wind-waves under gale force conditions occur about 7 times per year, mostly during the southwest monsoon. These show that incident waves diverge over the subaqueous delta due to the refracting effect of a submarine trough present on the eastern Bengal shelf. The degree of wave divergence, however, is largely dependent on deep water wave direction which varies from a southeast to southwest origin according to the changing monsoon wave field. Energy divergence produced by the Hatia Trough appears to influence certain shoreline morphology, the distribution of intertidal sand bars on both sides of the trough and the accumulation of mud at the head of the trough. Computations of the effect of tidal currents on wave refraction show that flood currents deflect waves more to the east while ebb currents deflect them more to the west. This may induce a counterclockwise sediment transport gyre around the Bengal shelf at the mouth of the Ganges-Brahmaputra rivers. The nearbed orbital velocities obtained from refraction modeling show that their magnitudes are one order higher than the thresholds required to re-suspend the fine bed material present, indicating that waves play an important role in the redistribution of river borne sediments. 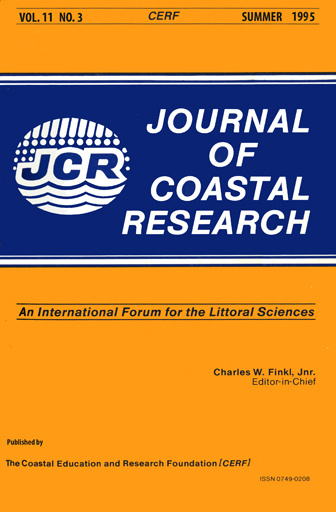