Utilization of Coastal Geomorphic Features as Indicators of Longshore Transport: Examples of the Southern Coastal Region of the State of Sao Paulo, Brasil

On the Brazilian coast, where sandy shores predominate, not only the form of the coastline but depositional features associated therewith (spits, sandbanks, etc.) have also been frequently used as geomorphic indicators of the predominant direction of the longshore transport of sediments. On the southern coastal region of State Sao Paulo, the growth of prominent features is related not only to the longshore drift but also to the interaction between these processes and internal dynamics strongly conditioned by the action of tides. This intense interaction takes place especially in the proximities of lagoonal mouths. In the lagoonal mouth of Ararapira (on the boundary of the states of Sao Paulo and Parana) the growth of the sandy spit occurs in the opposite direction to that of the drift of the current responsible for the transport of sediments along the coastline. On the other hand, on the lagoonal mouth of Icapara, to the northeast of Iguape (SP) the growth of the sandy feature occurs in the same direction as that of the drift current most effective in the transport of sediments, inasmuch as there is conformity between this and the vector resulting from the currents of the lagoonal region. Therefore, the simple observation of the direction of the growth of coastal features, when associated with lagoonal or estuarine systems, strongly controlled by tidal conditions, cannot be used without reservations as indicative of the predominant direction of the transport of sediments along the coastlines. 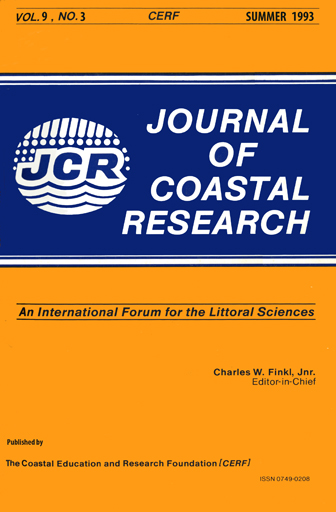