Interactions Between Nearshore Processes and Beach Morphology Near a Seawall

Rising sea level, storm waves, and development pressures along coastlines have led to construction of many types of coastal protection structures in many different coastal environments. With the construction of each seawall or other protective structure comes an ongoing debate over the long-term and short-term effects of that structure on the surrounding coastline. Engineers, developers, and coastal planners need qualitative descriptions and models of the effects of seawalls on the coastal environment in order to make intelligent decisions about when and where coastal protection structures are appropriate. Although researchers have documented effects of seawalls on beach morphology, there are few observations of seawalls actually interacting with nearshore dynamic processes. This investigation documents short-term effects of seawalls on nearshore hydrodynamic processes and the resultant beach morphology. Visual observations, measurements of the beach water table at a seawall-natural beach boundary, and comparisons of beach profile variation show that a seawall affects (1) swash velocity, duration, and elevation, (2) beach groundwater elevation, and (3) beach slope variability. These effects occur when high waves and swash interact with the seawall. Swash that is reflected by a seawall is directed seaward several seconds earlier than swash on an adjacent natural beach, increasing backwash duration and velocity. Also, less infiltration 10 front of the seawall increases backwash volume and velocity. Swash is focused at the seawall flanks, accentuating run up and infiltration. Buried portions of a seawall or revetment alter beach porosity, permeability, and beach groundwater elevation. Because of the relatively mild conditions that prevailed during the four-year study period, the seawall's effect on processes produced only minor effects on beach morphology. It is reasonable to conclude that increased wave energy would increase the differences in response between natural beaches and those protected by seawalls. 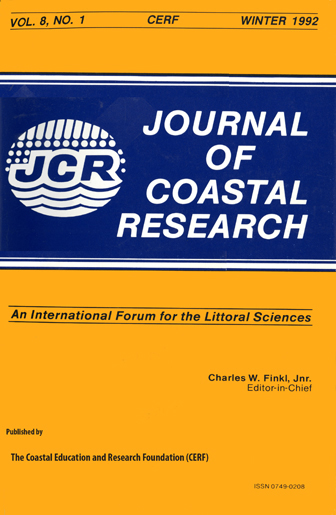 Published
1992-01-14
Issue
Vol 8 No 1 (1992): Journal of Coastal Research
Section
Articles
Authorization for personal use is granted by the Coastal Education and Research Foundation [CERF]. By submitting a manuscript, the authors agree that the copyright for their article is transferred to the publisher if the article is accepted for publication. Assignment of copyright is not required, however, from authors who work for organizations which do not permit such assignment, The copyright covers the exclusive rights to reprduce and distribute the article, inclduing reprints, photographic reproductions, microform, or any other reproductions of a similar nature, and translations.