New and potential herbicides for blueberries 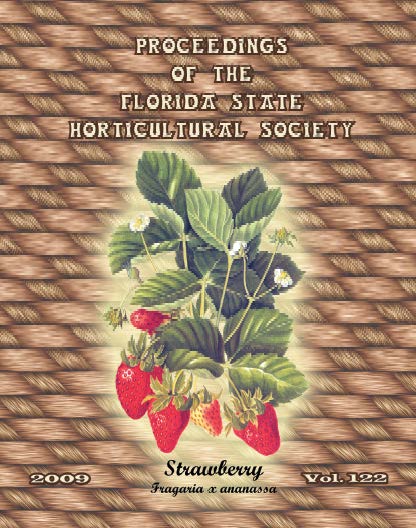 There has been an increased interest in the establishment of commercial blueberry farms in the west-central Florida region over the last 10 years. Weed management has been one of the most important considerations that growers undertake in their normal production operations. Since the majority of the blueberry farms in the region utilize pine bark culture as their production system, it is important to evaluate the effi cacy and crop tolerance of registered and potential herbicides in this system. Growers have been reporting phytotoxicity to blueberries treated with herbicides containing the active ingredient glyphosate. In 2007 a trial was established to evaluate glufosinate (Rely 1E) as an alternative to glyphosate containing products. Rely at 6 qt/acre provided control of Brazilian pusley [Richardia brasiliensis (RCHBR)] comparable to glyphosate (Roundup Weathermax), while only glyphosate resulted in acceptable yellow nutsedge [Cyperus esculentus (CYPES)] control. No signifi cant crop phytotoxicity was observed. Results of this trial were utilized as support for the registration of Rely in Florida commercial blueberry farms. In 2008, two new herbicides registered for blueberries, fl umioxazin (Chateau) and mesotrione (Callisto), plus one product with potential to be efficacious in blueberries grown in pine bark culture halosulfuron (Sandea) were evaluated. Sandea provided excellent
yellow nutsedge control for 28 days. A tank mix of Rely 1E + Chateau herbicide provided acceptable Brazilian pusley control through 43 days. In 2009, an additional trial with Chateau and Callisto alone and tank mixed with Rely 200 was established. Initial results indicate acceptable weed control from both products.
PDF